ISAPP Science Blog
You are here: Home1 / Consumer Blog2 / The Microbiome — Can it aid in the diagnosis and therapy of irritable...

Irritable bowel syndrome (IBS) is one of the most common gastrointestinal disorders and seems to be prevalent across the globe1. Although non-fatal, IBS impacts on quality of life, personal relationships and productivity and can impose a significant socioeconomic burden on the individual as well as on society at large. Despite considerable effort there is still no test to diagnose IBS and, in clinical practice, the diagnosis commonly rests on the presence of characteristic symptoms, such as those defined by the Rome criteria2, in an individual in which alternate diagnoses have been excluded or deemed unlikely. The concern of the IBS sufferer and his/her physician is that because IBS symptoms are relatively non-specific (abdominal pain, altered bowel habit and bloating) a diagnosis based on symptoms alone may miss “something serious”.

Several challenges confront those who attempt to design a diagnostic test or new therapy for IBS. First, IBS is not a homogeneous disorder; symptoms, their severity and impact vary considerably. Second, symptoms tend to fluctuate over time with periods of calm interposed between episodes of much distress. Third, it is almost certain that IBS is multifactorial with various factors contributing to a variable extent in each sufferer. Over the years, genetic predisposition, gut motility and sensation, how the brain senses activity in the gut, and how the body responds to stress have all been invoked to explain the development of symptoms in IBS. While all of these factors undoubtedly contribute, none has yielded a diagnostic test.

One concept, that of the gut-brain axis, has served as a useful paradigm to explain IBS symptoms with dysfunction at various points along the axis, which extends all the way from the cerebral cortex to gut muscle, nerve and mucosa and back again, variably contributing to the presentation of IBS in different individuals3,4. Now, connections between the gut and the brain have been extended to include a new participant, the microbiome. This leads to the concept of the microbiome-gut-brain axis, whereby bacteria resident in the gut could impact on the “big brain” and even contribute to neurological and neuropsychiatric disease5. There is substantial experimental data to indicate that gut microbes influence components of the gut barrier, the intestinal immune system and the neuromuscular apparatus of the gastrointestinal tract, as well as central nervous system structure and function6.

Could the gut microbiome produce a diagnostic test for IBS?

That microbiota might be a factor in IBS was first suggested by the observation that IBS could develop de novo in the aftermath of acute enteric bacterial, viral or parasitic infections7. More recently, modern sequencing technology has been applied to fecal and colonic microbiota in IBS with the aim of determining relationships between a variety of clinical and demographic parameters and microbiota. Although data remain limited, and not always consistent, it is evident that IBS patients have an altered fecal microbiota relative to healthy individuals8. Currently available data are fraught with challenges in interpretation – small study populations, variations in patient selection and methodology, not to mention a failure to account for such confounders as diet, stool form and consistency, therapy, co-morbid psychopathology and symptom severity. Nonetheless, some overall patterns have emerged: the fecal and colonic mucosal microbiota are different in IBS and the fecal microbiota may not only predict severity9, but also responsiveness to one common intervention – the low fermentable oligo-, di- and monosaccharides and polyols (FODMAP) diet10. It is now abundantly clear that the expectation that a single microbial signature might typify IBS was naïve.

While we are not yet able to diagnose IBS using the microbiome, some very interesting observations have resulted from applying the highest quality microbiome science to what was once regarded as fringe and unimportant.

In the first of these studies, Kashyap’s lab, and its collaborators, employed a multi-omics approach in a longitudinal study of a reasonably large cohort of IBS sufferers and were able to identify IBS subtype-specific and symptom-related variations in microbial composition and function and to relate certain bacterial metabolites with physiological mechanisms relevant to IBS in the host11. A disturbed microbiome or an aberrant host response to the microbiome might well involve the generation of intraluminal molecules with biological effects on motility, sensation, gut barrier function, immune activation and, of course, communication with the central nervous system. A very high level of methodological complexity was needed to identify these relationships since IBS symptoms vary not only between individuals but over time within individuals.

IBS sufferers have been telling us for decades that having a meal often makes their symptoms worse. Various explanations have been advanced to explain this phenomenon ranging from an exaggerated gastro-colonic reflex to food allergy and intolerance. A recent paper from Aguilera-Lizarraga and colleagues reveals just how complicated this story might well be – involving an interaction between bacterial infection, dietary antigens and immunoglobulin (Ig)E and mast cell responses in the host. In a mouse model, infection with Citrobacter rodentium led to a breakdown in oral tolerance to the food antigen ovalbumin which resulted in the development of an IgE antibody-mediated response locally in the colon and ultimately to diarrhea and visceral hypersensitivity, a common feature of IBS12. They went on to show that the injection of some common food antigens (soy, wheat, gluten and milk) into the rectosigmoid mucosa of IBS sufferers resulted in edema and mast cell activation. It was notable that the development of visceral hypersensitivity in the mouse model did not appear to be related to any change in the resident microbiome or to ongoing chronic inflammation but seemed to be a very specific interaction between the original infectious insult, loss of oral tolerance and the subsequent development of IgE antibodies to a dietary antigen. The net result was the activation of neural pathways responsible for visceral hypersensitivity.  These findings certainly extend our understanding of post-infection IBS, but to what extent they relate to IBS, in general, remains to be determined.

To date the focus on studies of the microbiome in IBS (or, for that matter, in most disease entities) has been on bacteria. Das and colleagues expanded their microbiota inquiry to consider the contributions of fungi (the mycobiome) to IBS13. They found significant differences in mycobiome diversity between IBS sufferers and control subjects but the mycobiome could not differentiate between IBS subtypes. Interestingly, mycobiome alterations co-varied with those in the bacteriome but not with dietary habits. Unfortunately, as has been the case with studies of bacterial populations, these changes in the mycobiome proved “insufficient for clinical diagnosis”.

Based on the assumption that gut microbial communities are disturbed in IBS and considering the success and overall excellent safety record of fecal microbiota transplantation/transfer (FMT) in the management of severe or recurrent Clostridioides difficile infection, it should come as no surprise that FMT has been employed in IBS14-24. Results to date have been mixed and, for now, preclude a recommendation that FMT be adopted to treat IBS. Two observations are of note. Both are derived from a randomized double-blind, placebo-controlled, clinical trials where the instillation of the patient’s own feces served as the control. First, the positive clinical results in the studies by El-Salhy and his colleagues seem to relate to the use of a “super-donor”20. Second, the report from Holvoet and colleagues suggests that the baseline microbiome of the recipient predicted response to FMT albeit in a very unique group of IBS sufferers21.  Indeed, it appears that a successful FMT, in IBS, is associated with the normalization of a number of components of the colonic luminal milieu22-24. Herein may lie clues to guide the future use of “bacteriotherapy” in IBS.

It should come as no surprise, given advances in techniques to study the microbiota coupled with exciting data from animal models, that the paradigm of the microbiota-gut-brain axis has been proposed as relevant to IBS. The possibility that a disturbed microbiome, or an aberrant host-response to that same microbiome, might be relevant to IBS and could impact on the CNS is now being contemplated seriously as an avenue to understand disease progression and treatment as well as to open new diagnostic and therapeutic possibilities on this challenging disorder. As much of the extant data comes from animal models one must remain cautious in their interpretation – no single animal model can recapitulate the IBS phenotype. The bi-directionality of microbiota-gut-brain interactions must also be remembered – the complex interactions between inflammation and the gut microbiota exemplify how a disease state can impact on the microbiota.  With regard to interventions, there are many intriguing approaches, but still a long way to go to achieve personalized pharmabiotic therapy for that very special individual – the IBS sufferer. 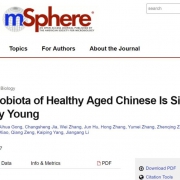 ISAPP board members look back in time to respond to Benjamin Franklin’s... Five things scientists should know about the future of probiotics and prebi...
Scroll to top